A few days ago I was browsing my Instagram feed and came over a post from the Estonian Weather Service which depicts a massive phytoplankton bloom in the Baltic Sea. I've decided to take a closer look at this spectacular phenomenon and fetched some data from the Sentinel-3 satellite for the regions where the bloom is developed mostly.

After some manual processing, including atmospheric corrention, brightness and contrast fine-tuning, I've got two stunning pictures which I'm sharing with you below.

Three decades of satellite observations suggest that these green blooms are likely to be cyanobacteria (blue-green algae), an ancient type of marine bacteria that capture and store solar energy through photosynthesis (like plants). Some of the greens also could come from diatoms, which are also rich in chlorophyll. (NASA, 2018).

Algal blooms are a normal and essential part of life in the sea, but they become a problem when they occur too often, are too large, last for too long a time, and produce toxic substances.

Intensive blooms were a rare phenomenon a hundred years ago, but have become increasingly frequent in recent years as a result of the increase in temperature in Baltic and Finnish coastal waters, as well as the increase of pollution in these seas which provide ample nutrients for these organisms. (ESA, 2015).

In my next blog post, I am going to show how these blooms are connected to the temperature of the sea surface, and what is the role of the winds in forming these intricate vortexes and patterns. 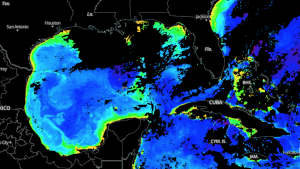 These days some large media websites (here and here), and Twitter too, are buzzing about Harmful Algae Blooms (HABs) that happen across the U.S., and, unfortunately, led to a fatal…